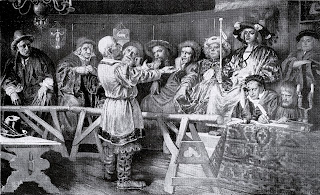 Solicitor Chris Ryan was so kind to report in the mock UPC trial which had been organized by EPLIT in Munich last Friday.

The idea of the European Patent Litigators Association (EPLIT) to run a mock UPC trial based on the famous Improver v Remington litigation of the late eighties and early nineties struck me as a really interesting idea when I first heard the suggestion. It turned out to be a fascinating and highly educational experience when it was run last Friday (22 January) at the Sofitel Bayerpost Hotel conveniently close to Munich station.

The Improver litigation did more than establish the “Improver questions” in English law for assessing equivalence ([1990] FSR 181). It led to a series of decisions around Europe, based on the same European patent and the same alleged infringement, in which judges reached very different conclusions on the question of whether a claim for a “helical spring comprising a plurality of adjacent windings” covered a solid rubber rod with slits cut into it, which was capable of performing the same task – pulling out hair when set up in an arcuate configuration and rotated at speed around its axis.

Will the arrival of the UPC repair the fault line in the European Patent system, which the Improver story so clearly identified? On the evidence of the mock trial it will do just that. The “mock” Local Division in Munich reached a decision on validity and infringement which took effect in every designated Member State albeit that it may take time to develop a body of interpreted law and procedure that is consistent across the territory of the EU and distinct from that of the individual Member States from which judges may be drawn.

The panel of judges consisted of Prof Haedicke (Oberlandesgericht in Düsseldorf), Mr Zigann (Landgericht in Munich) and Mr Van Walderveen (District Court in The Hague). They were joined by Mr Klein as Technical Judge (formerly of the Boards of Appeal of the European Patent Office).

The patent proprietor was represented by Rainer Beetz (Sonn and Partner, Austria) and Leythem Wall (Finnegan Europe LLP, Great Britain). The defendant was represented by Marek Lazewski (Lazewski Depo and Partners, Poland) and Jan Stein (Ipracraft AB, Sweden). The case documents had been prepared by these representatives together with Markus Rieck (Fuchs Patent Attorneyes, Germany).

I found the main trial (in the afternoon) was slightly less interesting than the Case Management Conference which preceded it in the morning. The final conclusion was that the patent was valid and infringed. However, it was not the outcome that I found most interesting. It was the differences in approach adopted by advocates and judges and the manner in which the presiding judge ran the business of the trial.

On the first point, the debate on validity turned on inventiveness over two elements of prior art. It was not entirely clear (to me, at least) which of several available tests for determining inventiveness was being relied on at different stages of the debate between the judges and the advocates, or in the judges’ deliberation over their conclusion. Similarly, in respect of the infringement issue, all parties seemed to agree that two questions required to be asked by the judges but were unsure whether there was a third question and, if so, what it should be. I suspect that all the judges were deliberately staying within the comfort zone of the approach that would be adopted at each stage within their own domestic courts. Their approach certainly illustrated the challenge facing the UPC (at both first instance and appeal level) of establishing a body of jurisprudence over time which will be distinct from the law emanating from national courts.

The second point that struck me was the power of the presiding judge in setting an agenda and then outlining each issue in some detail before inviting the parties’ advocates to address it. It may be, of course, that the stark contrast with the way in which a case would be conducted in London was accentuated by the artificiality and time constraints of a mock trial. And no doubt those familiar with EPO hearings will find the inquisitorial approach and management of the debate on each issue more familiar. It certainly led to a crisply efficient disposal of each element of the case and the dispute as a whole.
Firm management of the process and the emergence of national differences in approach were even more evident during the Case Management Conference.

The organisers of the event had tweaked some of the facts of the original case in order to create some interesting preliminary issues. Had the proprietor opted back into the exclusive competence of the UPC in time where the defendant had issued an application for a declaration of non-infringement in the English Court on the same day as that on which the application to opt back in was entered on the register (Rule 5.9 – opt out not permitted where “an action has been commenced before a court of a Contracting Member State …prior to the entry of the [opt back in] Application in the register…”). If it had, should the UPC proceedings nevertheless be stayed under the Brussels Regulation’ requirements to avoid multiplicity of proceedings. And if the proceedings were still on their feet after those two challenges did the Local Division have jurisdiction over the dispute, given that, first the only sales in Germany had been a couple made by a third party who had acquired the goods in Poland and on-sold them in Germany against the wishes of the defendant and, secondly, very substantial sales had been made in the UK.

There was also an application at the Case Management Conference to strike out the claim of literal infringement because it was unarguable (application granted by the Rapporteur but reviewed at the main hearing, when the ruling was reversed) and the court required the claimant/plaintiff to amend the request for remedies (prayer for relief) by providing a great deal more detail as to the scope of the injunction sought. The amended version available at the main hearing tracked the language of the relevant patent claims in identifying which products would be covered and even included a photograph of the defendant’s product. The difference between the precision of drafting expected in, for example, the German courts was contrasted with the broad scope of injunction sought and granted in the English courts. In this case the German pattern prevailed, designed, it was said, so that a court bailiff called upon to enforce it would have no doubt as to whether a product he came across did or did not fall within the scope of the court order.

Other issues touched upon included the language of the proceedings (English because it was one of the languages which the Local Division had designated), translation facilities at the main hearing, summoning of witnesses, the appointment of a technical judge and, in the light of his appointment, the need for any expert evidence (and in which field of technology), as well as security for costs.

Listening to the well-structured submissions on each of the issues raised, and then eavesdropping on the judges as they considered their decision, proved to be an extremely effective means of improving (gaining) familiarity with the relevant procedural rules.

The judges helpfully paced both the debate with the advocates and their own deliberations to assist the audience in tracing each issue, and the decision made on it, back to the language of the current draft of the rules.

Judges, advocates and organisers are to be congratulated on an extremely informative and interesting learning experience. Another success for the increasingly effective Association which brings patent attorneys together from around Europe in its continuing efforts to assist their preparations for the new court and to influence the way it will operate.


This blogger is very grateful for this report because he was unable to attend to the event himself.  The report confirms my impression form previous mock-trials that the degree of activity of the presiding judge in managing the discussion in the trial and asking questions is one of the aspects of procedureal law which is still entirely unharmonized.  Mock trials with international panels really give an impression on the clash of (legal) cultures we will be experiencing once the UPC is up and running.
Pubblicato da Michael Thesen a 9:40 am