The Second Annual Sir Hugh Laddie lecture, "From National Patent Litigation to a European Patent Court: a Dream, a Wish or Soon Reality?", takes place on 15 June 2010 in the Cruciform Building, Gower Street, London. This year's speaker is well chosen for the subject, being none other than Raimund Lutz (President of the Bundespatentgericht). The event is hosted by IBIL (the Institute of Brand and Innovation Law), which is part of the Law Faculty, University College London. Professor Jan Brinkhof is in the chair.

The theme of this year's lecture is as follows:

"For more than four decades experts and politicians have endeavored to create a European Patent Court. Such a European Patent Litigation System would be indispensable for a future Community Patent, or as it is now called, an EU-Patent. Some also believe it would be desirable to make this court responsible for the European Bundle Patents in order to unify the decisions made regarding the whole of these bundles.

President Lutz will discuss the status and future of this project, as well as possible alternatives to some of the details of the proposed solutions".

President of the Court since 2006, Herr Lutz was formerly Head of the Subdivision for Trade and Business Law at the Federal Ministry of Justice, Berlin, where his primary focus was on intellectual property.

You can click here for full details and registration.
Pubblicato da Jeremy a 3:47 pm No comments:

In many countries any sort of IP litigation is a specialist activity, but in large, sophisticated and litigation-aware jurisdictions like the United States each area of IP is a discrete field of expertise and even within each field it is possible to discern sub-specialities. Outside the US there can be few jurisdictions on the planet where the volume and nature of legal activity could support a title such as Patent Ethics: Litigation, the latest work by Professor David Hricik, and which would permit nearly 300 pages of sources and analysis.

According to the publishers' web-blurb

"Patent Ethics: Litigation serves as a guide to the ethical issues arising in the course of the patent litigation process. By providing relevant rules and case law, it allows practitioners to identify ethical problems before they arise and to address them most effectively when they do. Patent Ethics: Litigation is the second of two volumes on patent ethics-the first is on prosecution-written by Professor David Hricik and Drinker Biddle partner Mercedes Meyer. This treatise is the first of its kind to combine the PTO rules with commentary by the author, which distills the author's own experience and expertise in patent litigation into effective practice strategies.

The book is not yet on the bookstore shelves, or indeed available online, but its home page can be accessed here. Published from the US desk of Oxford University Press, its ISBN is 978-0-19-536709-6. The UK price is to be £135.
Pubblicato da Jeremy a 5:55 am No comments:

In Nationwide Filter Company v Berni Hambleton BL O/091/10 Nationwide, the owner of a UK patent (GB 2411367), sought a review of a Comptroller's Opinion in which the examiner considered its patent -- which was for a method of forming a filter unit of the type comprising a filter element located in a peripheral encasement frame with a seal between the periphery of the filter element and the frame -- invalid for lack of inventive step over a prior French patent document. J. Elbro, hearing the review, cited the principles articulated by Mr Justice Kitchin in DLP Limited [2007] EWHC 2669 and concluded that, since the examiner’s opinion was not clearly wrong and no error of principle was alleged, there was no basis on which to set aside any portion of the Opinion.
The hearing officer also declined to consider an alternative obviousness argument which was based on a US document, which was raised unsuccessfully by Ms Hambleton. Since this argument had been rejected in the Opinion, it was not within the scope of review sought by Nationwide under the Patents Act 1977, Section 74B.
Pubblicato da Jeremy a 6:29 pm No comments:

Email ThisBlogThis!Share to TwitterShare to FacebookShare to Pinterest
Etichette: Appeal against Opinion on validity

Making directors liable in Australia: what must be proved?

The current issue of the Allens Arthur Robinson Intellectual Property Newsletter features a good note by Trevor Davies and Rob Silberstein, "Patent infringement and company directors", on the 22 February 2010 ruling of Bennett J (Federal Court of Australia) in Inverness Medical Switzerland GmbH v MDS Diagnostics Pty Ltd and others [2010] FCA 108. Issues raised in this note include the liability of a director for an infringement performed by a company as well as liability for authorising the company's infringement.

In this case the third respondent (Dr Appanna) was recorded on the company website as being the managing director and founder of the first respondent, MDS; he also controlled the MDS companies as shareholder. but was he liable for the acts of MDS as a joint tortfeasor? Australian case law has developed three separate tests for establishing director's liability: Bennett J affirmed that, as the Full Court decided in Allen Manufacturing Co Pty Limited v McCallum & Co Pty Limited [2001] FCA 1838, it is not necessary to determine which test is the correct one, but had no doubt in concluding that Dr Appanna was liable. The following paragraph of the judgment, with key words highlighted, points to evidential targets:

"I am satisfied that Dr Appanna’s position as the Managing Director of MDS NZ and his participation in the procurement and distribution of the MDS devices in New Zealand and Australia are sufficient to establish that he deliberately, wilfully or knowingly pursued a course of conduct that resulted in MDS selling products that infringed the Inverness patents. Further, he was aware of competing products on the market and was indifferent as to whether or not those products were protected by patents. In taking part in the activities of MDS NZ and MDS Aus as a director and in the management of those companies, Dr Appanna directed or procured the obtaining of and the selling of the products that infringed Inverness ’ patents".

As to authorising infringing conduct under section 13(1) of the Patents Act 1990 (Cth), it is infringement of a patentee's exclusive rights not only to exploit an invention but also to authorise another person to exploit it. The judge agreed. Liability is established where it is shown that the alleged infringer authorised exploitation in that he sanctioned, approved or countenanced the act of infringement. Here it was shown that Dr Appanna knew that the infringing act of the sale of the products would occur, had the power to prevent those acts and was under a duty to interfere but failed to do so.
Pubblicato da Jeremy a 10:40 am No comments:

An expensive loss: what profiteth a man who loses his money ...

In Betson Medical (Ireland) Ltd v Comptroller General of Patents [2010] EWHC 687 (Pat), an appeal to Mr Justice Kitchin (Patents Court, England and Wales) from the Comptroller in which judgment was given on 31 March 2010, the issue before the Court involved non-payment of renewal fees and its consequences.

In short, Betson filed his patent application in December 1996. Nearly three years later, in October 1999, he assigned his application to Betson Medical, the company he set up to exploit his invention. Although Betson and his company were well aware of the renewal date, neither could pay the renewal fee for the patent in December 2003 for lack of funds. Betson himself sought funding both from banks and pfrom rivate investors, but no money was made available to him to pay either the renewal fee and additional fee within the time limits and the patent lapsed.

In July 2005, Betson Medical filed an application for restoration under rule 41(1)(a) of the Patents Rules 1995. The Intellectual Property Office did not consider that even on a prima facie basis had the requirements for restoration been met. Betson Medical was given a hearing date for September 2009. At that hearing the application was considered under s 28(3) of the 1977 Act (as it then stood):

"If the comptroller is satisfied that - (a) the proprietor of the patent took reasonable care to see that any renewal fee was paid within the prescribed period or that the fee and any prescribed additional fee were paid within six months immediately following the end of that period, the comptroller shall by order restore the patent on payment of any unpaid renewal fee and any prescribed additional fee".

The respondent comptroller refused the application to restore since Betson Medical had not exercised reasonable care to see that the renewal fee was paid in time, or during the six month grace period. Betson Medical appealed and Kitchin J had then to consider whether Betson Medical, as proprietor of the patent, or Betson himself on its behalf, had taken reasonable care to see that the renewal fee and the prescribed additional fee in respect of the patent were paid by the expiry of the grace period.
Kitchin J appeared to face no difficulty in dismissing this appeal. On the evidence, the company had faced severe financial difficulties in the period up to and including June 2004 and Betson himself had made strenuous efforts to secure funding in order (i) to ensure the commercial exploitation of his invention and (ii) to pay renewal fees for all its patents. However, on the application of settled principles, Betson had not shown that he had taken reasonable care to see that the limited sum in respect of the patent in question was paid by June 2004.
PatLit feels that it is such a shame that, having not had the money when he had the patent, the claimant had to deploy his funds so fruitlessly once he did have it.
Pubblicato da Jeremy a 5:52 pm 1 comment:

Some thoughts from Fordham on industrial applicability 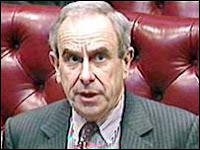 "The chances are that if two sides are squabbling about a patent, it has some industrial applicability" -- so said Lord Hoffmann when introducing the topic at today's session of the 2010 Fordham Intellectual Property Conference. His Lordship then reviewed the Court of Appeal's decision earlier this year in Eli Lilly v Human Genome Sciences (here), in which the question arose as to the degree of proof required for predictability of the likelihood of a specific outcome (in this case, treatment for an unspecified disease of the immune system). The EPO had considered that likelihood of treatment for a class of diseases was sufficient, while the trial judge had considered that the likelihood had to be narrowed to a specific condition. This issue relates to that of breadth of claims, which are likely to be wider in juvenile sciences such as biotech. In this case the Court of Appeal did not describe the difference between the EPO approach and that of the British courts as one of policy; Lord Justice Jacob's court had undermined the principle that the British courts should keep their decisions in line with those of the EPO and was therefore wrong.
Pubblicato da Jeremy a 7:32 pm No comments: