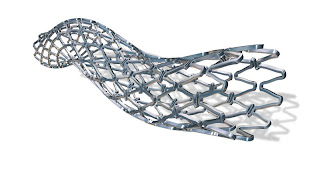 PatLit made reference in July (here and here) to the application for disclosure (evidence) made by Abbott in the course of an action in which it sought declarations of non-infringement, and orders for revocation, of three patents for coronary stents owned by Medinol, while this company counterclaimed for patent infringement.

A copy of the full text off the decision, dated November 12, is now available here.

The result: one of the patents is invalid since it lacks of novelty and none of them is infringed by the Abbott stents.

This decision follows those of The District Court in The Hague (Netherlands) and the Regional Court in Dusseldorf (Germany). A brief summary of both actions can be found in the Form 10-Q filed by Abbott at the SEC in May 4, 2010 (here):

“In its 2009 Form 10-K, Abbott reported that litigation is pending in the High Court of Ireland, the District Court in The Hague, Netherlands, and the Regional Court in Dusseldorf, Germany in which Medinol Limited asserts that certain Abbott stents infringe various Medinol stent design patents and seeks damages and injunctions, and in the High Court of Justice in the United Kingdom in which Abbott asserts that its stents do not infringe Medinol’s patents and seeks a declaration that Medinol’s patents are invalid. In February 2010, Medinol appealed the Dutch court’s finding that Abbott’s stents do not infringe Medinol’s patent. In March 2010, the Dusseldorf court found that Abbott’s stents do not infringe Medinol’s European stent design patent, a patent also at issue in the other venues, but that they do infringe two of Medinol’s German stent design patents. Medinol can seek to enforce its right to damages and a provisional injunction in Germany. Abbott has the right to appeal the decision of the Dusseldorf court. In addition, as previously reported in Abbott’s 2009 Form 10-K, Abbott filed an action in the German Federal Patent Court asserting that the three Medinol patents at issue are invalid. If the German Federal Patent Court invalidates Medinol’s patents, then any relief granted by the Dusseldorf court could be rescinded”.

The arguments used by Mr. Justice Arnold in the new Judgement seem quite usual, but from a procedural point of view, I would point out the following paragraphs:

190. The starting point is that, since Medinol now positively alleges infringement of 901, the burden lies on it to prove what happens to the loops in this scenario. Despite this, Medinol has not relied on any experimental evidence in support of its case. In particular, it has not relied on any finite element analysis ("FEA") of its own despite having in-house expertise in FEA. Following an order for specific disclosure which I made on 8 September 2010, it sought to rely upon an analysis of an FEA model created for Abbott, but ended up agreeing that the facts established by this did not go beyond points (i) and (iii) in paragraph 188 above. Nor has Medinol relied upon any photographs in support of its case.

191. Medinol did rely upon promotional materials issued by Abbott and evidence given by Mr Johnson as to the function of the loops in question in the Abbott Stents, namely to aid flexibility and conformability of the stents. This evidence does not establish, however, that the loops participate in expansion as distinct from bending of the stents.

193. … On the contrary, the burden lies upon Medinol to prove that the loops do widen in this scenario; Medinol have adduced no positive evidence to that effect other than Professor Snyder's opinion; Professor McHugh's evidence is to the contrary; and, even if the Abbott photographs and measurements cannot be relied on as positively proving that the loops do not widen, they are at least consistent with Professor McHugh's opinion. Certainly, Medinol did not conduct an experiment in reply to Abbott's experiment to show that taking photographs and measurements in a manner which was not subject to Medinol's criticisms lead to a different conclusion.

194. Counsel for Medinol argued strenuously that, even absent any other evidence, it should be inferred from points (ii)-(v) in paragraph 188 above that the loops on the outside of the stents widened when bent Abbott Stents were expanded. I am not persuaded that those matters do enable that inference to be drawn, however. Each of those scenarios involves some bending of the stent, whereas the scenario presently under consideration involves just expansion. In that respect, it is closer to scenario (i).

195. For these reasons, I conclude that Medinol has not proved that the loops do widen when the bent stent is expanded".
Pubblicato da Antonio Selas a 8:12 am