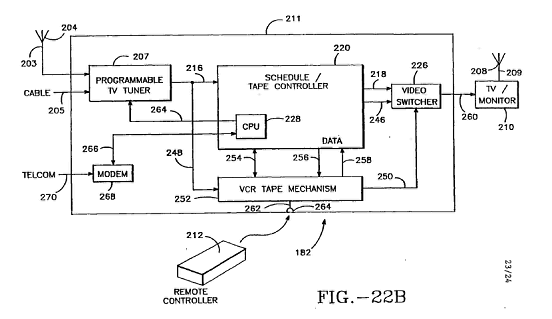 Via Paul England (a professional support lawyer at Taylor Wesing and an occasional guest blogger with the IPKat) comes the following note on a mammoth judgment delivered yesterday by Mr Justice Arnold in the Patents Court, England and Wales, in Starsight Telecast Inc. and United Video Properties Inc. v Virgin Media Limited, Virgin Media Payments Limited and Tivo Inc. [2014] EWHC 828 (Pat). The ruling, which spans 316 paragraphs, is richer in terms of analysis of the facts than in establishing any new principle of law, but still has plenty in it in the manner in which it holds invalid a pair of patents for blocking adult TV channels.  Explains Paul:


Starsight and United Video (collectively "Rovi") claimed that Virgin and TiVo (collectively "Virgin") infringed EP (UK) 1 763 234 which was an "Improved electronic television program schedule guide system and method" and EP (UK) 0 821 856 for "Merging multi-source information in a television system" by supplying two different classes of set-top box ("STBs"). Specifically, both of Virgin's STBs were capable of providing the user with a "TV Guide" and performing functions that allowed the user to "Hide Adult Channels" or have an "Alternative Adult Listing Display" by entering a PIN and accessing the STBs' respective parental controls menu.

In respect of the "Hide Adult Channels" function, claims 1 and 11 of the '234 patent were held not to be infringed, because entry of the PIN would not in itself change the availability of the adult channels, as was required by these claims. It would instead merely allow the user access to the relevant menu to edit the adult channel settings. In relation to the "Alternative Adult Listing Display", Virgin did not dispute infringement of claim 1. However, on the basis that this function would not operate by checking a record of schedule information in a database, as disclosed in the '234 patent, but would check whether the parental control option was turned on or off, the alleged infringement of claim 2 of '234 was disputed. Despite this argument, the judge found that claim 2 was infringed.But, Mr Justice Arnold also held the '234 Patent as a whole to be invalid for obviousness.

The judgment, which followed eight days of hearings, contains one small item that attracted my attention: the notion, at [126], that a witness who was essentially a lone inventor might not be considered as being representative of a member of a skilled team who whom a patent is addressed.
Pubblicato da Jeremy a 1:49 pm