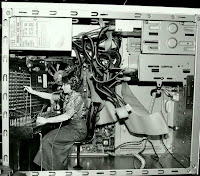 An excellent note, "The “Prepaid Telephone Card” Decision of the Higher Regional Court Düsseldorf", by Felix T. Rödiger and Nina Malzhacker, was published earlier this month by leading patent practice Bird & Bird here. The note summarises and explains the recently-published decision the Higher Regional Court, Düsseldorf, which extended the scope of national method patents to cross-border situations. Prepaid Telephone Card complements an earlier decision of the Bundesgerichtshof, Rohrschweissverfahren, which considered that a national patent was infringed by an action which started abroad but ended in Germany. Until Prepaid Telephone Card, however, it was unclear whether the same principle applied in reverse.
In this case the patent was for a method for processing prepaid telephone calls which comprised various procedural steps, involving a server, which could be toll-free, accessed via a code number imprinted on a vendible telephone card. Since the defendant's server was located outside Germany and, apart from the sale of the telephone card, most of the steps described in the patent were performed abroad, the defendant argued that the principle of territoriality excluded an infringement of the German patent.
The Court disagreed: while actions which take place exclusively abroad cannot constitute a German patent infringement, cross-border actions are different. Said the court, there are two scenarios. In the first, the infringing act commences abroad but is completed in Germany; in the second, the infringing act starts in Germany but is completed abroad. In both cases, actions performed abroad must be treated like domestic actions when the infringer exploits them in order to infringe a national patent.
The effect of this decision is that it has become more difficult for companies to circumvent an infringement of a method patent in Germany and that the outsourcing individual steps to various countries will no longer give “a freedom to operate”. This decision is currently under appeal to the Bundesgerichtshof.
Says PatLit, readers might want to compare this case with the approach taken by the Court of Appeal for England and Wales in Menashe Business Mercantile Ltd. & Anor v William Hill Organization Ltd [2002] EWCA Civ 1702, where similar issues arose.
Pubblicato da Jeremy a 10:53 pm