ACTA: Not yet born and already gone


The Anti-Counterfeiting Trade Agreement (ACTA) was rejected by the European Parliament on 4 July 2012, by 478 votes to 39, with 165 abstentions. Parliament could not amend the ACTA, but only approve or reject it. Its rejection means that neither the EU nor its individual member states can join the agreement. 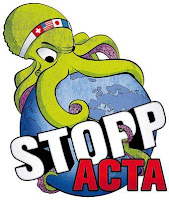 "In so doing, it followed its International Trade Committee, which recommended on 21 June, by 19 votes to 12 with no abstentions, that Parliament should indeed reject it.

On 19 June the Petitions Committee debated 5 petitions from citizens calling on MEPs to reject ACTA, one signed by over 2.8 million people from all over the world. The 5 petitions were kept open, meaning that citizens will continue to have a clear means to appeal if they feel that ACTA does not comply with EU law.

On 25 April 2012 David Martin, the MEP responsible for steering ACTA dossier through Parliament, presented his recommendation for the European Parliament to reject ACTA. He referred to concerns of unintended consequences of the ACTA, text specifically on individual criminalisation, the definition of “commercial scale”, the role of internet service providers and possible interruptions in the supply of generic medicines.

"The intended benefits of this international agreement are far outweighed by the potential threats to civil liberties. Given the vagueness of certain aspects of the text and the uncertainty over its interpretation, the European Parliament cannot guarantee adequate protection for citizens' rights in the future under ACTA. Your rapporteur therefore recommends that the European Parliament declines to give consent to ACTA", he said".

As Jeremy pointed out a couple years ago (here) “ACTA is a good deal less radical, and much less sinister, than had at first been feared in result of the exclusionary and secret manner in which it was initiated and originally drafted”. Why has then been rejected? I would say that the secrecy in its creation has driven to this result. ACTA final version here European Parliament Press release here
Pubblicato da Antonio Selas a 6:51 pm