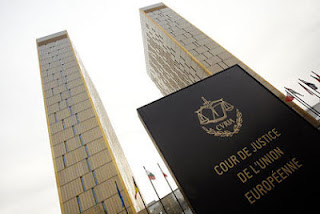 Simple question: a Belgian shopkeeper B sells a product infringing a German patent to his client C in his shop in Belgium. Infringement or not? Most of us would say the answer is plainly no – territoriality principle.

The BGH has now wondered whether this might change if the shopkeeper knows that the client wants to sell the product in Germany. Then, the act of selling could amount to contributory infringement.

The BGH has therefore referred the following  question on the interpretation of Art. 5 Nr. 3 EUGVVO (Council Regulation (EC) No 44/2001) to the ECJ:

If the answer would be positive, this would clearly open new and interesting options for cross-border litigation on the basis of Article 5 Nr. 3 of the Council Regulation (EC) No 44/2001 not only for copyright and trademark cases but also in patent cases where the application of Art. 6 Nr. 1 of the Council Regulation (EC) No 44/2001 is foreclosed after the ECJ-decision Roche/Primus, as long as Art. 22 Nr. 4 of the regulation does not enter the game.

On the same day, the BGH referred the same question on the interpretation of Art. 93 par. 5 of the Commnity Trademark Regulation (Council Regulation (EG) 40/94) to the ECJ. PatLit will keep you updated.
Pubblicato da Michael Thesen a 4:22 pm

Thanks for pointing this out, Micaela. The original post was quite misleading, indeed.

The decision makes the referral on the basis of a copyright- and trademark infringement case, but the question referred to the ECJ is broad enough to cover patent infringement as well(and generally the tort, delict or quasi-delict, being subject of the procedure), as as long as Art. 22 Nr. 4 of the regulation does not enter the game.

Since we are on a patent litigation blog, I thought it would be a good idea to illustrate a situation where the question could arise using a (purely hypothetical) patent infringement case.

Again, sorry for the confusion.