It's not that often that a mixed group of practitioners and academics in the field of IP face topics as varied as EPC 2000, free and open source software, the patentability vampires, zombies and other creatures and Burdon's ASS, all in one go. But it happened on Tuesday at the Patent Law Seminar - where theory meets practice, chaired by PatLit's Jeremy Phillips and kindly hosted by Olswang.

Peter Watchorn from the European Patent Office provided an overview of the changes effected in EPC 2000, focusing particularly on the moves to align the EPC with the PLT, the lifting of blanket exclusions for further processing, the more limited exclusions for re-establishment of rights, the requirements for filing dates and priority claims. Other changes in the EPC covered were those requested by users, including the limitation and revocation procedures and the petition for review by the Enlarged Board of Appeal (all yet to be tested).

Robert Gomulkiewicz of the University of Washington School of Law then shifted to free and open source software (FOSS) and the movements' fear of patents. After a quick overview of FOSS and the open source movement, Bob proposed 10 reasons for FOSS not to fear patents, which opened the floor to some heated discussion.

Christopher Wadlow, a professor at the University of East Anglia, ventured into the underworld of patentability by measuring against the yardstick of Chakrabarty and US jurisprudence the position of the 'undead', especially in the context of the patentability of 'living' organisms under American law. Taking a structured approach, he sought to determine whether such terrifying creatures as Vampires, Zombies, Werewolves and Golems were patentable.
Right: a werewolf -- or just a seminar participant in search of a drink? 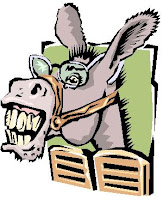 Returning to the more earthly fear of the costs of patent litigation, Michael Burdon made a strong plea for the Alternative Simplified System (Burdon's ASS, a.k.a. the Burdon Plan) for patent litigation in England. ASS is a 10-point plan comprising the capping of recoverable costs at £100k, standard pleadings, limiting the number of invalidity attacks to three, PPD, no disclosure or experiments, fixing the trial period at the close of pleadings within 4-6 months, limited statements of case and evidence, a 4 day trial period and trial, plus cost recovery where the costs are allocated in judgment and the winner recovers 100% of the allocation. There's a lot of interest in this streamlined and rigorous procedure but, in order to make it a reality, industrial and professional bodies need to give it a vigorous push.

The trigger for this event, and the excuse for the drinks that followed it, was the launch of Patent Law and Theory, a whopping great book edited by Toshiko Takenaka as one of the publisher's Research Handbooks in Intellectual Property (Jeremy being the series editor). Copies of the book were on display: some were even sold!
Next week, once everything has been sorted out, PatLit looks forward to posting the PowerPoints and sound files for the various talks. Till then, have a lovely weekend!
Pubblicato da Jeremy a 12:23 pm