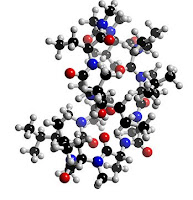 Today's decision of Mr Justice Arnold in Novartis AG v Dexcel-Pharma Ltd [2009] EWHC 336 (Pat), Patents Court, England and Wales, has been posted on the BAILII website -- you can read it here. In a judgment that focused mainly on the evidence and was that was not at first glance legally controversial, Arnold J concluded that the defendant's Deximune product would infringe Claims 1 and 48 of Novartis's patent for "pharmaceutical compositions comprising cyclosporins". Note: in earlier proceedings Floyd J had already granted interim relief.

"flawed because it is based on linguistic analysis rather than consideration of the technical purpose of the elements of the claim".

The skilled reader, he added,

"would not disregard the patentee's use of the word phase or the statement that the hydrophilic and lipophilic phases are non-miscible, but [would read] that statement in the context of the specification and having regard to the inventor's purpose he would understand that non-miscibility was required in the microemulsion but not in the pre-concentrate".

This would seem to be the correct approach: the skilled reader should not be regarded as embarking on a dry, linguistic interpretational exercise since that would not be the context in which he would ever come to read the patent in the first place.
Pubblicato da Jeremy a 4:14 pm