Killed by its own bullet 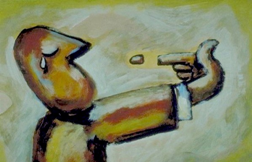 I read in Law.com here that “a federal judge has dismissed a patent infringement suit brought by Teva Pharmaceuticals after finding that its claims of infringing product formulations in the cholesterol drug Crestor were "conceived of and reduced to practice" by AstraZeneca Pharmaceuticals prior to Teva's patent”.

As we read in the decision here, AstraZeneca argued that “if the accused products infringe, as Teva alleges, then the asserted ‘502 patent claims are invalid because AstraZeneca “made,” i.e., conceived of and reduced to practice, the drug formulations that are now sold as CRESTOR® before Teva invented the subject matter of the ‘502 patent, and because AstraZeneca has not abandoned, suppressed, or concealed those formulations”.

“(1) AstraZeneca made the accused product formulations before Teva invented the subject matter of the asserted claims, (2) appreciated that the formulations were stable, and (3) did not abandon, suppress, or conceal the formulations”.

AstraZeneca also asserted counterclaims for a declaratory judgment of invalidity of the RE39,502 patent, due to prior invention.

What evidence was used? Teva’s own words.

The Judge agrees with AstraZeneca that “it may satisfy its burden to show that its earlier-made CRESTOR® products meet all the limitations of the asserted claims of Teva’s ‘502 patent by conceding, for purposes of this summary judgment motion only, Teva’s allegations of infringement”.

Thus, the bullet turned all around and "killed" the plaintiff. Mr. John's conclusion:

"AstraZeneca has presented clear, convincing, and undisputed evidence with which a reasonable jury could not disagree that it conceived and reduced to practice an embodiment meeting the limitations of the asserted claims of Teva’s ‘502 patent before Teva did, and that it did not abandon, suppress, or conceal its invention. There is no genuine issue of a material fact. Accordingly, the court will grant AstraZeneca’s motion for summary judgment of invalidity under § 102(g)(2)".
Pubblicato da Antonio Selas a 3:21 pm

Email ThisBlogThis!Share to TwitterShare to FacebookShare to Pinterest
Etichette: invalidity, prior conception, prior invention