Today I had a (EU Patent) dream

After decades blocked, the vast majority of EU Member States decided to solve all problems of the EU Community Patent system at once. Its ambitious purpose has just (apparently) suffered a death shot with the opinion of the Court of Justice of the EU issued today.

Maybe it was being too ambitious trying to solve at the same time economic problems (registration costs through all Member States) and practical ones (litigation in all the States), while trying to avoid the competence (control) of the Court of Justice, whose Judges have an alleged low expertise in Patent Law.

Looking back it may seem the dream of a group of patent passionate professionals. Now that we are awake, can we keep on dreaming?

Today during my siesta I had the following dream: 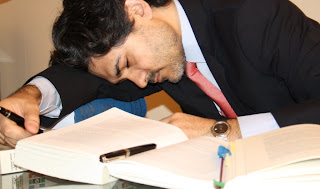 A single office for registration in a single language (in my dream it was Spanish but maybe it would be more realistic if it were English). That office was also dealing with cancellation actions and its decisions could be in first instance appealed at (a specialised section of) the EU General Court.

Unfortunately siesta doesn’t last as it used to and I woke up just when I was starting dreaming with infringement actions. I only had time to see specialised national Patent Courts. If my dream had continued I would have been able to see if a ruling of a national Paten Court (besides the District Court of The Hague) would have effects in all Member States. Maybe then I wasn’t dreaming with European Patents but with Community Trademarks.
Pubblicato da Antonio Selas a 6:30 pm

Nice one, Antonio, but my dream was different. European patents were drafted with such clarity, and peer-to-patent reviews had so effectively found the relevant prior art, that the only patents ever granted were easily to understand and of rock-solid validity.

In the end, there was no need for patent courts since there wasn't any patent litigation. The only problem remaining was what to do with the patent judges ...

Jeremy, yours is not a dream. That’s Heaven!