The Costs of the Trolls 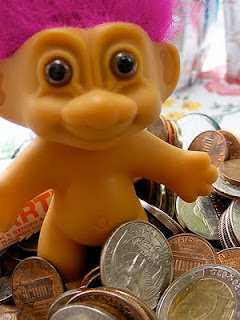 Boston University researcher James E. Bessen has published a study with the title “The Private and Social Costs of Patent Trolls” on SSRN which evaluates the alleged costs due to lawsuits filed by a particular group of non-practicing entities identified by the oganization “Patent Freedom” as trolls.

The method comprises evaluating the impact on filing a lawsuit onto the stock market value of the defendant companies in a time window a few days after the filing of the lawsuit. PatLit finds it not surprising that the news of being accused of patent infringement is considered bad news on the stock exchange and that the stock exchange rates tend to decrease as a result. A little more surprising is the finding that this effect is much less pronounced when the plaintiff is one of the alleged trolls (as compared to the effect of being accused by a “regular” plaintiff). Lawsuits filed by trolls generate a mean loss of 0.32%, whereas other studies have shown that the news of an ongoing patent litigation lead to losses of around 1.5% to 2% in the stock exchange rate.

Whilst the author’s definition of trolls as individuals “who opportunistically litigate over software patents with unpredictable boundaries” appears to divest a mind which is not completely unbiased, PatLit - as an impartial organ of the administration of justice - has to insist on the presumption of innocence and thinks that at least a fraction of the alleged damages might be due to patent infringements committed by the defendants, for which the poor trolls are not to blame.
Pubblicato da Michael Thesen a 2:36 pm