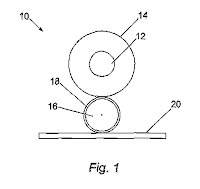 Industrial Self Adhesives Ltd v Teknek Ltd and others [2012] EWPCC 10, 8 March 2012,  took a look at a variation on a theme that is becoming increasingly common these days -- the question whether the settlement of a case actually finishes it off or whether there is scope for further fiddling around with it.  The Chancery Division, England and Wales, recently visited this question in a different context, involving a post-settlement consent order in a trade mark infringement action which was subsequently challenged for, among other things, breach of EU competition law (see IPKat post here).  In that case, the strong public interest in the finality of a dispute settlement was emphasised.  Industrial Self Adhesives Ltd v Teknek was however exploring a different post-settlement issue: might the Patents County Court for England and Wales amend a patent post-settlement.

In this action, which originated in a claim for unwarranted threats, Judge Birss QC held that the Patents County Court enjoyed the same jurisdiction to deal with post-settlement amendments to a patent as did the Technology and Construction Court itself in Lars Norling v Eez-Away [1997] EWCC 369 (TCC). This did not mean, though, that the court should go ahead and deal with the amendments in every circumstance: there might be circumstances in which the proper course was for the patent owner to apply to the Comptroller instead.

On the facts of the case before Judge Birss, it appeared that the Comptroller had no comments to make; no opponent had come forward following the advertisement of the amendments sought by the patent owner; nor had the claimant in these proceedings objected. There wasn't any apparent controversy and no matter of public interest arose.  Accordingly, even though the amendments were more than simply an exercise in amending down to an existing dependent claim, it was appropriate for them to be dealt with immediately in the Patents County Court.
Pubblicato da Jeremy a 9:33 am