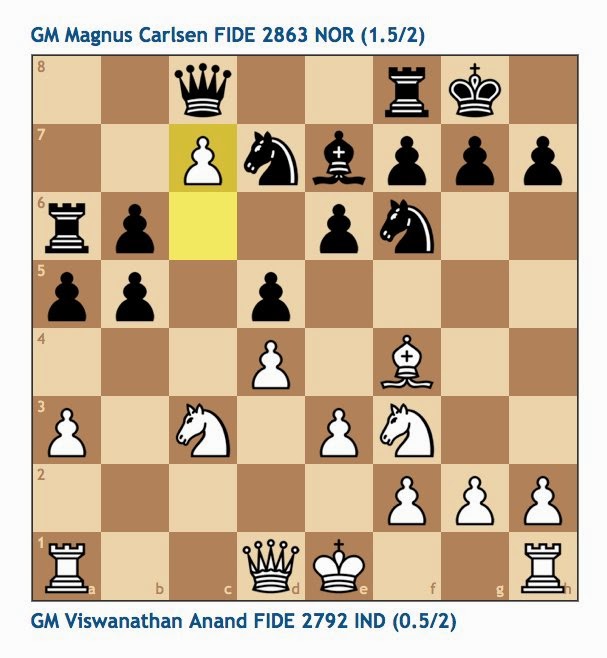 In the third game of the World Chess Championship in Sochi, challenger Viswanathan had put a  pawn on c7 quite early. Initially, the pawn did not look very dangerous but slownly tunred into a true monster pawn binding major parts of Carlsen's energy the longer the game lasted.

The crucial role of the seemingly harmless expression "data transmission delay" in the decision T0480/12 reminds me of this monster pawn of Viswanathan Anand. In the end, these words turned out to be as fatal as was the pawn for Magnus Carlsen:

Here is a quote from the grounds of opposition (emphasis added):

The feature "data transmission delay or latency" was introduced to replace "delay of data" during the examination procedure at which the latter had been regarded as unclear, because of leaving the reader in doubt as to the kind of processing referred to, e.g. processing delay, queuing delay or transmission delay (see communication of 4 November 2004, point 1.3). In the course of the opposition procedure the term "or latency" was deleted in the aim to overcome an objection as to added subject-matter. The respondent objected to the remaining feature "data transmission delay" for lack of clarity and argued that the term was no longer clear due to the deletion of "or latency".

Moreover, the interpretation of the term "data transmission delay" on the basis of the description, see in particular paragraphs [0076], [0082] and [0083] was different from how this term was used by the skilled person.


referred to by the respondent during oral proceedings, there are different types of delay like propagation delay, processing delay, queuing delay, transmission delay etc. (see e.g. section 2.1). Without further specification, the skilled person would interpret the expression "data transmission delay" in claim 1 to refer to this special type of delay rather than to the whole delay. The skilled  person would not understand claim 1 in a way that it is referred to more than the transmission of the data without further considering the description.

This means that:
Looks like a blueprint for clarity attacks to virtually every amendment made after grant to this blogger!
Pubblicato da Michael Thesen a 10:12 am

I wonder how many Readers here are familiar with the EPO's "Bermuda Triangle". For this T Decision strikes me as a fine "Poster Child" to illustrate it. Look what happened.

In prosecution, Applicant gets an Art 84 clarity objection, so amends. After issue, Opponent asserts that the amendment offends Art 123(2) added matter.

What can the patent owner do, in this Catch 22 situation. The issued claim contains new matter, but the only permissible amendment offends Art 84.

When reading the written decision, fix on the DG3 writer's term "whole delay" and ask yourself whether that particular writer is good enough in the English language to meet the Art 84 standards that he himself is imposing on those who write patent applications in English.

Should we ask the EBA curently active in Art 84 referral G3/14 to take this particular Decision into account in their deliberations?

words used in the claims must have a clear meaning per se;

No, the claim has to be clear per se. If the claim had defined the term "data transmission delay" in accordance with how the term is used in the description, i.e. "with further specification" of the term, there would have been no problem.

MaxDrei, how can you fail to notice that the clarity argument is a purely technical one and has nothing to do with linguistic issues? Translate the whole thing into German or French and nothing changes.

I am grateful for the feedback from the anonymous contributer. Yes, of course, the clarity problem is the same in French and German. But my point is different.

When the Decision coins the expression "whole delay", is that supposed to mean i) "the entire duration of the delay" or ii) "all sources of delay"?

To this English native speaker, the context suggests the latter but the plain words suggest the former. Is it then "insolubly ambiguous". If so, does that not trouble you?

It's probably because English is not my mother tongue, but I tend to read into

the underlying assumption that meeting that Art. 84 standard requires linguistic rather than technical skills.

Anyway, there can be no doubt that the term "whole delay" refers to the whole of the delay, i.e. to the sum of the propagation delay, processing delay, queueing delay, transmission delay and any other type of delay that may play a role in a particular case. This is the ordinary meaning of "whole delay" and this is how the decision uses the expression. A more common term is "end-to-end delay". See e.g. Wikipedia.

Excellent comment, that last one. Many thanks for the clarification of "whole delay". What you write in English makes perfect sense, to this native English speaker.

What might we learn from this? 1. That your grasp of the technical field of the case is better than mine. 2. That the Decisions of DG3 are aimed at the person skilled in the relevant art. 3. One should read all the case documents (I didn't), before presuming to comment on clarity.