Transitions in European Patent Law and the new patent package: a new book

Here's a new book that might appeal to PatLit readers.  This blogger has yet to see it (though he has just asked for a copy), but it looks both topical and significant, in that it is a serious academic perspective on an issue that has been well-nigh monopolised by patent practitioners (to be fair, the German practitioners can hold their own in academic company, as can a fair number of their colleagues in other jurisdictions).

The book in question is Transitions in European Patent Law. Influences of the Unitary Patent Package by Rosa Maria Ballardini, Marcus Norrgård and Niklas Bruun.  It's published by Wolters Kluwer, who have this to say about it: 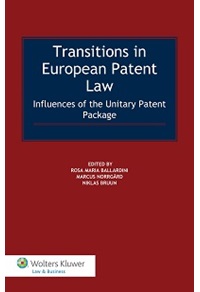 New complex technological sectors like software and biotechnology pose unprecedented challenges for patent law. In Europe, this situation has engendered patent law reforms which, after several years of struggling, seem to have finally concretized in the Agreement on the Unitary Patent and the Unified Patent Court signed by twenty-five EU Member States in February 2013 (the so-called EU Patent Package). In this ground-breaking book – derived from the work of the highly respected and penetrating PatLim project in Finland [you can read all about PatLim here] – nineteen prominent experts explore issues arising in the context of the emerging European patent system. The book analyses how substantive and procedural patent law rules in highly complex technologies interact within each other’s frameworks and within the overall IP framework, as well as within the frameworks of other intellectual property rights and other fields of law, such as competition law. Topics and issues include the following:


* judicial independence of specialized courts;
* the concept of dynamic patent governance;
* legal certainty in patent law;
* the inventive step and patent policy;
* prior rights, conflicting applications, and secret prior art;
* patent interpretation and the doctrine of equivalents;
* preliminary injunctions in the Unified Patent Court; and
* misuse of patent application procedures.

There is also a valuable comparison with the most recent transatlantic patent reforms, such as the America Invents Act of 2011. This is the first book to put the current evolution of European patent law in legal, economic, historical, and technological perspectives. As such, this important collection provides a rich understanding of the ways that patent law reacts to and provokes complex technological phenomena. The controversial issues raised and solutions and interpretations offered will be well worth the study of patent professionals within and beyond the European patent ecosystem.

At £118 it's not even dear for a book on patents these days. Further particulars are available from Wolters Kluwer here.
Pubblicato da Jeremy a 11:06 am