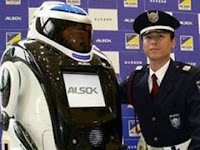 The debate over the proposal by celebrated inventor Trevor Baylis that patent infringement be the subject of criminal proceedings as well as actionable under civil law (reported by the BBC here) has triggered a good deal of debate (see for example the large number of comments following Birgit Clark's article "Criminalising patent infringement -- barking mad", published on the IPKat here.
Left: interesting problems might arise where robot policemen themselves constitute infringements of third party patents
Since the debate is likely to continue for a while, PatLit thinks it might be worthwhile making a few points:

* The Crown Prosecution Service in England and Wales, and its Scottish and Northern Irish equivalents, have little knowledge and experience in any branch of intellectual property law. The same can be said for the courts that hear criminal cases. Such expertise would have to be acquired at a cost and would have to be renewed or refreshed at regular intervals, particularly if it were not regularly brought to bear;

* Countries that do make provision for the criminal prosecution of patent infringers appear to invoke the criminal only very rarely;

* If, as in the case of criminal trade mark infringement, it is open to the accused to raise any defence which he might raise in corresponding civil proceedings (see the House of Lords ruling in R v Johnson [2003] UKHL 28), a defendant in criminal proceedings might be expected to raise issues such as invalidity on any number of grounds, not to mention arguing the toss under the Protocol to Article 69 of the EPC on the issue of infringement;

* The possibility will arise for an aggrieved patent owner to seek to invoke the threat of prosecution for criminal infringement as a way of discouraging secondary infringers such as distributors and retailers from handling allegedly infringing goods. Would and should a patent owner who presses the police to prosecute be liable for wrongful threats?

* If criminal law is to remain an important component of the protection of both rights owners and society at large in the fields of trade mark and copyright infringement, are the grounds upon which patent infringers are either included or excluded from that group clearly understood?

PatLit would like to hear from readers as to whether they consider the general criminalisation of patent infringement (i) necessary, (ii) desirable or (iii) unfeasible. Comments, please!
Pubblicato da Jeremy a 10:59 pm

In the days of the Soviet Union it was a criminal offence to infringe a patent. I have not information on prosecutions under this law.

This is a bad idea for so many reasons.

In issues of piracy and counterfeit goods the products are not legitimate and clearly they degrade the reputation and commercial value of the originator of the rights. I don't think that is even enough for criminal sanctions to apply. I submit that the idea of criminal sanctions for these acts are in place solely because these acts are sometimes associated with criminal activity and such a law allows the CPS discretion to bring proceedings in cases where it is warranted.

For patent infringment these are commercial disputes between competing enterprises. If one company takes a poisiton on a patent right then he can test it or be challenged in civil proceedinsg and the outcome should, in a ideal world, bring the parties back to their original positions. If the civil proceedings are not effective then fix the civil proceedings.

For such a case you/we/society think that it is of greater value to protect those patent rights, which may not be valid, to a greater extent than any "infringer" - importer, producer or user - may be liable to imprisonment and a criminal record? Surely not.

If a patent is revoked it is revoked as though it were never filed. What then for the ex-con!

Trevor is close to becoming a national darling and has a populist view, but on this one he is way off beam.