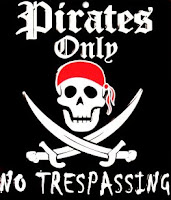 Fascinated by the growth of the Pirate Party around Europe in recent months, PatLit tried to do a little research on it. This is because, while that party's support for file-sharing without copyright restrictions is frequently mentioned in the media, its opposition to patents (particularly software patents), which is less well-known, may result in the party extending its activities to the submission of amicus briefs and otherwise supporting anti software patent causes. The party is now active, so far as Wikipedia's entry on Pirate Party International shows), in most countries in Europe. It is particularly active in Sweden (where it has secured representation in the European Parliament) and Germany (where it is represented both in the German parliament and at local level).

This causes PatLit to wonder: if the Pirate Party were to seek to intervene in patent litigation in European national courts or to side with a defendant in infringement proceedings, where would it stand the best chance of success? It is a well known but regrettable fact that, while the European Patent Convention ostensibly provides the identical standard for patentability in all its member states, the application of its principles at national level is far from homogenous; some nations' courts seem quite comfortable with software-related patents which others would hesitate to uphold -- whether as business methods, presentations of information or computer programs "as such", or as lacking sufficiency or inventive subject matter.

PatLit therefore asks: which European jurisdictions are likely to be the most resistant, and which the least, to assaults on the validity of software patents? If you have any insights, do let me know. If we get enough responses we can even publish a 'league table' ...
Pubblicato da Jeremy a 2:46 pm

I agree with Stephane.

I also think that the *most* resistant to assaults are the Netherlands and Germany. I am not so sure about France, but previously they seem to have been very resistant. It would be nice to hear something about France from another reader.

The Swedish (administrative) Court of Patent Appeals seems this year to have fully aligned itself with the EPO-practice (they seem to believe that they did that already last year considering their citations of case law of 2008) and I hope that the Swedish Civil courts take that into account. In other words, I believe that Swedish civil courts will be more resistant to "assaults" today, but you never "know" with Swedish civil courts.