Is it worth bothering, if all you get is Hungary? 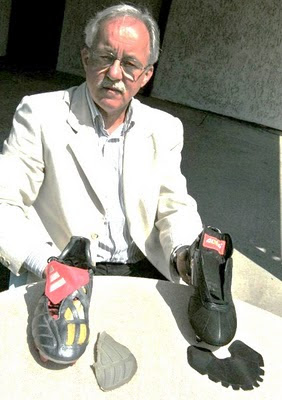 Football has been much in everyone's mind over the past few weeks, to PatLit makes no apology for alluding to it here. Thank you, Jelena Jankovic (Petosevic), for this link to your news item, "Adidas Loses Against Hungarian Inventor in Patent Infringement Suit", which reads in relevant part as follows:

"On May 12, 2010, the Hungarian Patent Office (HPO) ruled in favor of the Hungarian soccer gear inventor Laszlo Oroszi in his patent infringement suit against the German sports apparel manufacturer Adidas, concerning Oroszi’s patent known as the ball-directing striped-line zone that Adidas allegedly, without Oroszi’s authorization, incorporated into their Predator Precision range of soccer shoes.

Oroszi told the Budapest Report that he registered the patent in Hungary on October 14, 1996, explaining that the striped zone at the tip of the shoe permits football players to shoot more accurately. Oroszi’s representative presented the patent to Adidas in 1998, but Adidas declined the offer claiming that it does not fit into their concept for the then new Predator Precision soccer shoes. However, Oroszi claims that the Predator Precision soccer shoes with his patented concept were launched just before the Euro 2000 soccer Championship.

Oroszi notes that, although Adidas earned millions by using his concept without his consent, he cannot sue the company outside Hungary, as he has no funds to obtain foreign patent protection.

As stated in the Budapest Report (here), although Adidas negated the accusations and maintained that they used their own ideas, they were not able to provide the patent for the concept that was built into their soccer shoes".

Through lack of funds Oroszi was apparently limited to bringing his action in one small jurisdiction which, presumably, does not award damages in respect of infringement of the same patent by the same defendant outside that jurisdiction. If an inventor can afford to protect his patent in Hungary alone, is it worth bothering to get a patent at all?
Pubblicato da Jeremy a 8:32 am