Time up for qui tam trolls? 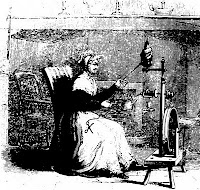 Recent 'false marking' cases in the United States have drawn attention to what seems to be a productive little cottage industry in the field of patent litigation, where anyone -- regardless of their commercial interest -- can go in for a bit of bounty-hunting by initiating actions against anyone who falsely marks a non-patented product as being patented (see, for example, the earlier PatLit post here).
Right: Grandma checks her spindle and distaff for signs of false patent marking
A current bill to curtail the practice, H.R. 4954, is currently under consideration by the House Committee on the Judiciary. This bill would provide recourse for persons who suffer what the ABA's Intellectual Property Law section terms "competitive injury" as a result of false markings; the ABA section recommends a clarifying amendment to assure that such parties are eligible to bring an action against a false marker. In a letter to Representatives John Conyers Jr. and Lamar Smith, chairman and ranking member of the Committee, the ABA writes:

"H.R. 4954 would amend the false marking statute, 35 U.S. C. 292, which provides for both governmental sanctions and private enforcement actions for false patent-related marking of articles in commerce. The statute calls for fines up to $500 per offense, with private party enforcers entitled to half of the applicable fine. The bill would repeal subsection (b) section 292, which provides that any person may bring a “private attorney general” or qui tam enforcement action against false marking, without a showing of economic or competitive injury, and substitute there for authority for private causes of action limited to persons who have suffered a competitive injury. Remedies would be limited to “recovery of damages adequate to compensate for the injury suffered by the plaintiff”, rather than the 50% bounty system now in Section 292(b).

We support changes in the nature of the private actions that may be brought for false markings, and in the recovery allowed. Following the 2009 decision of the Federal Circuit in Forest Group, Inc. v. Bon Tool Co., awards to successful qui tam realtors are based on the number of articles falsely marked, rather than treating each decision to falsely mark as an offense. We believe that there is neither need nor sound policy reason for such an award system, which seems to have inspired a cottage industry of false marking qui tam trolls who have no connection to or injury from the false marking.

We support amendment of Section 292 to assure that private actions may be brought by persons who suffer injury from reliance on false markings even though they may not as a technical matter qualify as competitors. For example, small and medium sized manufacturers may lack the legal sophistication to know that they should verify the listing, or the resources to do so. Relying injuriously on the false marking, they decide not to enter the competition. We recommend a clarifying amendment to H.R. 4954 to assure that such parties are eligible to bring an action against the false marker. This could be accomplished by inserting ‘or who was injured by having detrimentally relied on such violation’ after ‘this section’ in line 8, page 1 of the bill".

Prima facie the case for reform seems so powerful that it is difficult to see the force of logic of any defence of the status quo. PatLit wonders, though, whether the United States is alone in having a bounty-hunting provision such as section 292 on its statute books -- or is this a reflection of a long-lost strand of patent policy which was once prevalent in patent philosophy elsewhere.
Pubblicato da Jeremy a 5:29 pm