PCC Page 16: How big are the patent attorney’s boots? 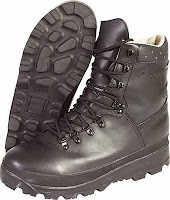 In this, the 16th in the series of Patents County Court (PCC) Pages, we continue the saga of the litigation between Cautious Co and its arch foe IPOff Ltd, which Cautious accuses of infringing various intellectual property rights in its robotic octopus.  PatLit thanks the Chartered Institute of Patent Attorneys (CIPA) and in particular its President Alasdair Poore, for supplying these episodes.  This week's PCC Page considers whether it might be possible for the defendant IPOff to inconvenience Cautious Co by ensuring that Cautious would no longer be able to engage a patent attorney in the PCC?


IPOff has sent details of their defence to their solicitor.  While he/she is preparing a formal defence ready for IPOff’s director and others who have personal knowledge of the matters set out to sign the statement of truth (and incidentally preparing the proposed claim in the High Court for threats – see PCC pages 14 and 15), IPOff and this blog is relaxing.  However, given their desire to make life difficult for Cautious Co’s patent attorney, perhaps IPOff has missed a trick.  Could IPOff have added in some additional element to the claim which would have meant that the case could no longer be handled by a patent attorney in the Patents County Court – rather than hoping that the claim for threats will not be transferred from the High Court to the PCC?
In the light of the recently reported Atrium case (Atrium v DBS [2011] EWHC 74 Pat – not yet on BAILII), on the scope of rights of patent attorney, it is perhaps worth a reminder of the scope of jurisdiction of the PCC.  Atrium has been discussed on a number of blogs, including Patlit (Jan) and Patlit (Feb) and on the Hogarth Chambers website, so no detailed comment will be made here.  (See also Chris Ryan’s comment on the second (Feb) blog, relating to a PAL’s right to act on restoration of a company for the purpose of transferring its trade marks).  However, it does make clear that a broad interpretation should be given to the scope of a patent attorney litigator's rights, and that these cover claims in relation to agreements relating to inventions, as well as pure intellectual property infringement claims.  This is of course relevant to some aspects of claims in the PCC, as noted below.
The jurisdiction of the Patents County Court is divided into two areas: matters within the “special jurisdiction”; and other cases which can be heard in the county courts.
The relevance of the special jurisdiction is that patent attorneys who are not patent attorney litigators can only conduct (or act as advocates in) cases within the special jurisdiction.  This is set out in s.287, Copyright, Designs and Patents Act 1988, and Article 3 of the Patents County Court (Designation and Jurisdiction Order) 1994.  The former provides the power to specify the special jurisdiction and the latter specifies that jurisdiction:  “to hear and determine any action or matter relating to patents or designs over which the High Court would have jurisdiction, together with any claims or matters ancillary to, or arising from, such proceedings”.  There is a proposal as part of the reforms in the PCC to change this to cover other intellectual property litigation, but for the moment, it remains limited to patents and designs and ancillary matters etc.
The scope of this was discussed in a rather older case, McDonald v Graham [1994] RPC 407 (under the 1990 designation order).  At page 431 et seq., Ralph Gibson LJ discusses the application of the provisions to a copyright claim which was brought in the same proceedings as a patent claim, and confirmed (p 435) that the term “ancillary” was not to be interpreted narrowly, and that “such a limitation would give rise to difficulties in the conduct of proceedings in the Patents County Court which cannot have been intended to be the intention of Parliament”.  However, it is worth noting that there is a threshold: in order for the PCC to have jurisdiction in other matters, there must be proceedings relating to a patent or design.  Note also that, in that case, Gibson LJ would not be drawn on whether “design” was limited to statutorily defined design rights, although he expressed the view that that was likely to be the case.
Atrium remains relevant to the PCC of course.  The PCC can hear cases outside the special jurisdiction.  These include cases which county courts can hear, including specifically intellectual property cases such as copyright and passing off cases, and as a result of The High Court and County Courts Jurisdiction (Amendment) Order 2005, which amends the 1994 Order, trade marks.   A patent attorney litigator can act in such intellectual property cases, and, in the light of the Atrium decision, these are not just restricted to intellectual property infringement cases, but also include cases where the protection of intellectual property may be relevant such as those involving licence agreements.
So IPOff would have had difficulty designing a claim which a patent attorney could not act on in the PCC, bearing in mind that Cautious Co’s principal claim is for patent and design right infringement, and it seems likely that other claims/counterclaims would be regarded as ancillary to such proceedings.

Pubblicato da Jeremy a 5:54 am