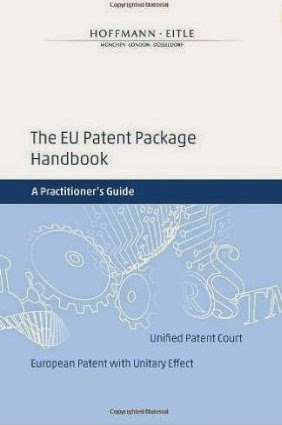 "The EU Patent Package Handbook: A Practitioner’s Guide" is a new patent law title from the distinguished German-based European intellectual property practice of Hoffmann Eitle. Compiled by a team of experts from that firm, this volume seeks to lay open the mysteries of Europe's new patent grant and patent litigation arrangements in a manner that is both lucid and pleasing to the eye.  According to the book's web page:


A new patent right for Europe (the European Patent with Unitary Effect) and a new European enforcement and invalidation regime (the Unified Patent Court) are expected to come into operation soon, potentially as early as 2015. Existing patents granted by the European Patent Office (EPO), as well as those granted in the future, will automatically come under the jurisdiction of the new Court, unless opt-out rights are exercised. These measures represent one of the most complex and ambitious legal reforms in the field of European intellectual property since the creation of the EPO in 1977. For applicants and proprietors used to the current European system of national patents and national courts, the new system will present both opportunities and challenges in developing, maintaining and leveraging a cost-effective patent portfolio. For manufacturers, distributors and end-users, the new system will subject their activities to the jurisdiction of a new court, with unique and possibly unfamiliar powers and procedures. Decisions must therefore be made as to how best to take advantage of the possibilities afforded by the new system.

Applicants and proprietors are already asking themselves questions such as:


- Should I start to register European patents as European Patents with Unitary Effect when they become available, or should I continue with national validation?

- For which European patents and applications should I make use of the opt-out to keep litigation in the national courts?

- Should I consider reverting to national filings instead of using the EPO?

- How will the new Unified Patent Court be structured, and how will it work?

- What choices will I have in future as to where to litigate – should I choose a national court or the UPC to enforce or invalidate a European patent?

Several of Hoffmann Eitle's patent attorneys and attorneys-at-law, all with years of practical experience in the field of European and intellectual property law, have diligently prepared an up-to-date handbook to provide both guidance for the strategic decisions which will have to be taken and a detailed reference manual to the law and practice of the new system.

This blogger hasn't had a chance to read the book from cover to cover, but he has dabbled in enough of it to see that it is a really handy handbook, authoritative enough to be useful for practitioners while at the same time being accessible enough for laymen to browse when seeking to appreciate the topography of the new European patent scene.  Diagrams, tables and an index listing the inevitable abbreviations all enhance its utility.

You can get hold of this book as a printed edition or in Kindle-friendly format via Amazon, iTunes and Google Play Store (some of these are free: details of links etc can be found here).
Pubblicato da Jeremy a 10:03 am