Last week, UNITAID released its full report on 'The Trans-Pacific Partnership Agreement: Implications for Access to Medicines and Public Health' (the IPKat, here, carries a number of posts that examined in detail the Trans-Pacific Partnership Agreement, including my analysis of patent-related provisions). The organization, established in 2006 by the governments of Brazil, Chile, France, Norway and the United Kingdom, aims to increase access to treatment for HIV/AIDS, TB and malaria for people in developing countries, promoting policy measures and international efforts to significantly reduce the price of quality drugs and diagnostics, while ensuring their widespread availability. From this perspective, UNITAID noted that several provisions included in the draft (leaked) version of the Trans-Pacific Partnership (TPP) Agreement 'have the potential seriously to hamper access to medicines', disrupting generic competition in the pharmaceutical market and negatively affecting the flexibilities embedded in the TRIPS Agreement and the Doha Declaration on the TRIPS Agreement and public health.

The report first looked at the provisions dedicated to patents. UNITAID observed that the TPP would generally require its parties to adopt low thresholds of patentability, resulting in an increase in the number of patents granted, inter alia, for medicines and medical technologies. Similarly, the agreement would prevent developing countries from adopting higher standards of patentability for secondary pharmaceutical innovation, such as the well-known Section 3(d) of the Indian Patent Act. This measure, according to the report, would incentive 'evergreening' practices, allowing patent holders 'to enjoy longer periods of exclusivity on a medicine than the 20-year minimum period prescribed by TRIPS'. Further, by affirming the patentability of plants, animals, surgical and diagnostic methods, the TPP would effectively repeal the flexibility afforded by Article 27(3) of the TRIPS Agreement. 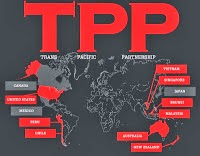 UNITAID noted that the agreement proposes the weakening of disclosure standards (in particular, watering down the requirement to disclose the best mode of working, and allowing Markush-style claims), altering the balance between patent reward and public interest. The organization also expressed serious concern about the provision prohibiting pre-grant opposition proceedings (withdrawn in the latest version of the TPP), and questioned the opportunity of providing a five-year extension of the patent term to compensate patent holders for delays related to the regulatory approval of patented drugs. Restrictions to the Bolar exemption were also described as measures which 'would create significant barriers to the rapid entry of generic medicines into export markets', due to the proposed limitations concerning manufacture and export of generic drugs.

Intense criticism was prompted by the provisions concerning data exclusivity and patent linkage. The former, proposed by the US and adversed by most of the other parties, would protect the safety or efficacy information submitted by a patent holder in order to obtain marketing approval for a new pharmaceutical product, if their origination involved a considerable effort, through a five year period of data exclusivity. A similar protection, albeit for a reduced period of at least three years, would also apply to new clinical information (except those related to bioequivalency) essential to the approval of a pharmaceutical product that contains a chemical entity previously approved for marketing in another pharmaceutical product. According to UNITAID, these provisions would result in duplicate clinical trials, force generic manufacturers to face high pre-marketing expenses, considerably increase the cost of generics, and interfere with the implementation of compulsory licenses, producing an overall negative impact on access to medicines. On patent linkage, the organization argued that it represents a particular concern in developing countries, as it provides patent holders with an additional tool to prevent generic entry, creating, at the same time, an additional burden on regulatory authorities.

After providing an overview of issues that arise from the TPP provisions concerning trademarks and copyright, the report examined the chapter related to the enforcement of intellectual property rights. First, UNITAID suggested that the adoption of a presumption of validity of patents and trademarks 'is likely to make it considerably more difficult to challenge intellectual property rights on medicines, while also increasing the risk to generic competitors of infringement proceedings'. Second, it observed that requiring civil judicial procedures to be made available for any intellectual property rights would reduce the flexibility allowed by TRIPS. Third, a number of measures for strengthening enforcement (e.g. disclosure of information concerning the supply and distribution chain of an alleged infringer, high damages, criminal penalties, etc.) would significantly discourage generic entry, with obvious negative effects on the timely availability of generic medicines. The report went on to examine other provisions related to border measures and public investments.

UNITAID concluded its report noting that the TPP would 'restrict the adoption of policy options for developing countries to ensure that trade or commercial interests do not hinder the protection of health and human development'. The organization explained that it supports the adoption of a 'positive agenda', which would ideally take into account all the interests at stake, balancing 'the goals of free trade and growth [with] the objectives of ensuring access to needed medicines and the protection of public health'. Further, it prompted a reflection on the reciprocal role of intellectual property and competition law, noting that stronger protection for intellectual property rights should be accompanied by a stricter and more effective enforcement of competition rules.
Pubblicato da Stefano Barazza a 10:36 pm

Judging the fairness of TPP provisions is clearly not easy. Perhaps what need is some sort of framework to do so. Perhaps the principles developed by the Max Planck Institute (see http://www.ip.mpg.de/files/pdf2/Principles_for_IP_provisions_in_Bilateral_and_Regional_Agreements_final1.pdf) would be helpful. These are discussed on the IPKat blog at http://ipkitten.blogspot.co.uk/2013/06/max-planck-launches-principles-for-ip.html.

A good post raising some really important issues. I balked a bit at the use of the adjective "notorious" referring to Section 3(d) of the Indian Patent Act, which is a perfectly reasonable approach for developing countries to adopt. It's almost certainly TRIPS-compatible, hence the reluctance of the US and Swiss governments to file a complaint at the WTO, and instead for the United States to circumvent the WTO in this and other ways.

Dear Graham,
Thanks for your comment. I agree with your considerations re Section 3(d). I used the adjective "notorious" as a synonym of "well-known", but I just discovered that, according to my dictionary, the former means "well-known, typically for some bad quality". My mistake!