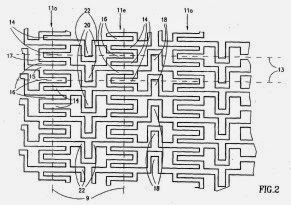 The German Federal Court of Justice (BGH) had to decide on an appeal against the decision of the Federal German Patent Court to nullify a patent relating to stents having two interlacing meandering patterns as shown in the embodiment on the right-hand side.
The pattern looks somewhat complicated at first sight but a thorough inspection reveals that it is basically a superposition of horizontal meanders along the lines 13 and vertical meanders along the lines 9, wherein the latter vertical meanders are phase-shifted or – to use the words of the patent – “even” and “uneven” patterns in alternating arrangement. However, the limitation to “even” and “uneven” patterns in alternating arrangement did not figure in claim 1 as granted but only as a feature of the (single) embodiment of the invention.

The Hoge Raad and the Irish High Court had limited the claim to stents with “even” and “uneven” patterns in alternating arrangement by arguing that the documents as originally filed lacked any disclosure supporting the broader claim.

The BGH did not follow this line and judged that – to the contrary of what the other courts had found – the lack of any disclosure excluding stents without phase shift from the invention leads to the conclusion that these embodiments are disclosed as a part of the invention in the documents as originally filed.

The full text of the decision in German language can be accessed here.
Pubblicato da Michael Thesen a 10:57 am