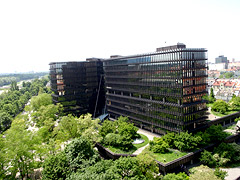 The appeal case T 0823/11 lies from the (not properly reasoned) decision of the Examining Division posted on 30 September 2010 to refuse a European patent application with the filing date of 15.05.1996, which has entered the European Phase on 15 December 1997.

The duration of 12 years is considered to be a substantial procedural violation justifying the reimbursement of the appeal fee. According to point 2 of the reasons:


In the opinion of the Board, the delays cannot be justified by the particular circumstances of the case. The duration of the first-instance proceedings of more than twelve years after entry into the European phase must be regarded as excessive. According to decision T 315/03, even a shorter delay of ten years in a much more complex opposition case amounted to a procedural violation (points 15.5 and 15.6 of decision T 315/03 which was published only in an abbreviated form in OJ EPO 2006, 15). The Board in that case found that such a delay was not "within a reasonable time" and therefore infringed Article 6(1) of the European Convention on Human Rights (ECHR).

This is reasoning is remarkable because it is one of the rare cases referring to the ECHR and the delay has some similarities with the purported delay of up to 15 years for labour cases against the EPO handled by the Administrative Tribunal of the International Labour Organisation (ILOAT).

The additional delay of 5 years for the 2nd instance is not mentioned or justified. Rather, the case is remitted to the examining division, not without noting that "...  the Examining Division should expedite its final examination of the remitted case."

Given that the Patent - once Granted - will expire in May this year, the reimbursement of the appeal fee will be a poor consolation for the applicant.

I also had noted the length of time that the BoA had sat on the case and for which they did not see any reason for an apology. At least the decision gives applicants some ammunition for fighting the interminable delays in the examination of some applications.

The sad thing is that this ammunition will miss the target. Grumbling at the examiner will not help because I hear that the examiners are very unflexible in re-ordering their files. The order is determined by a computer program designed to meet the ISO 9001 "quality targets" and the timelines for ECFS ("Early Certainty from Search")and PACE cases. Filing a PACE request will be the better choice for most cases but if the number of PACE and ECFS cases increases, the delays for "ordinary" cases will become completely insupportable.

In decision T 0877/10
http://www.epo.org/law-practice/case-law-appeals/pdf/t100877du1.pdf
it appears to have taken the Board six years to overturn the decision of the examining division refusing the application (with no hearing)! At least the decision was to order the granting of a patent rather than continued examination so at lest the applicant will have nine years of patent protection. What was the saying starting "justice delayed" again?

Yes, there are many sad examples. I had thought of posting on this one: http://www.epo.org/law-practice/case-law-appeals/recent/t092467eu1.html

The application was filed in 2001 and rejected in 2008. The ED did not search at all and basically said nothing but that the subject-matter of the claims is "notorious general knowledge" (the highbrow way of saying "all rubbish") without citing a single document. Then, the BoA takes another 7 years to decide that the case is to be remitted to the ED for further prosecution including an additional search.

15 years of prosecution and the EPO has not even searched, let alone entered the substantial discussion on the technical merits. How frustrating must this be for the poor applicant (Apple, Inc. in this case - strange to say "poor" here).

However, I am sure that the ISO 9001 certification will prevent that something like this will happen again ;-)