Geographical distribution of patent applications in Italy - where do inventors hide?

Last week, several newspapers and websites reported news of a study on the number of patent applications filed in Italy, in the period January - August 2013 (see Adnkronos here - data can also be directly sourced from UIBM). Filings in the first eight months of this year amounted to 5976, in line with the 2012's trend in the same period (5590). As expected, companies from northern Italy (Lombardia, Emilia Romagna, Veneto, Piemonte, Friuli Venezia Giulia, Trentino Alto Adige and Liguria) submitted the vast majority of the patent applications, totalling 3676 filings, about 61.5% of all the applications. Applicants from southern Italy (Campania, Puglia, Sicilia, Calabria, Basilicata and Molise) filed only 436 applications, or 7.3% of the total. Another 1212 applications (20.3%) came from other regions, while more than 600 filings were submitted by foreign entities (10.9%). Here is the list of patent filings per region:

The staggering contrast between the number of applications filed by companies in northern and southern Italy highlights a phenomenon known as 'dual market', as per the definition coined by The Economist, back in 1997 (you can read more here). The disparities found in the distribution of patent filings mirror those seen, for example, in growth rate, labour cost, gross wages and employment rates (discussed on The Economist and The Guardian). Comparing the number of applications with the gross domestic product (GDP) of each region shows that, although the richest, most economically advanced regions are generally favourable environments for inventors, there are exceptions to this rule. For example, a few regions (most notably, Lazio and Sicilia) score high on the GDP list, but fare worse in the list of patent filings. A reverse trend can be noted, for example, in Friuli Venezia Giulia, the 12th region for GDP, but the 8th for number of patent applications. The following table provides a comparison of GDP (data from 2011 - source: Wikipedia - ISTAT) and patent filings, and the ratio of the first over the latter:


The ratio of GDP over patent filings cannot provide a satisfactory measure of the relationship between inventions and economic strength, as the overall income generated by a region (or country) consists of more than R&D achievements (although some patent enthusiasts would strongly disagree!). However, it may constitute a useful indicator of the potential for R&D growth in any given region. Regions with low ratios represent ideal models for other regions which struggle to achieve the same economic efficiency and to provide an equally favourable environment for inventors. 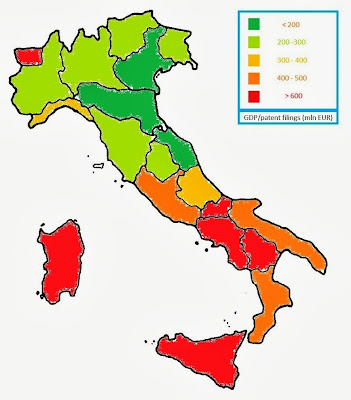 The idea behind the use of the ratio of GDP over patent filings as an indicator of potential R&D growth is that, given the same economic and infrastructural conditions, the geographical distribution of companies investing in R&D should be relatively balanced within the whole territory of a given country. Thus, regions such as Sicilia (ratio of 831.5), Campania (623.0), Puglia (507.9), Calabria (496.7) and Lazio (436.4) could potentially enjoy a significant increase in R&D growth, and consequently in patent filings, if their economic and infrastructural environment improved towards the models of Marche (150.6), Emilia Romagna (153.5), Veneto (162.9) or Lombardia (256.9). This colourful map of Italy shows which regions enjoy the best and worst GDP/patent filings ratios, providing a more accurate overview of how the geographical distribution of patent filings correlates with the actual economies of Italian regions.

Correlation and causation are, of course, distinct matters. Researchers have frequently tried to read patent statistics in light of economic factors, and vice-versa - for example, studying their relationship with economic growth (Hu and Png here, IPKat's post on 2012 WIPO's statistics), sustainable development (Saini and Jain here), public debt (see the IPKat's Schweizer's Law). The multitude of variables involved in the analysis of the real economic impact of patent filings frequently prevents researchers from reaching definite conclusions, although it is apparent that some form of correlation, and possibly a reciprocal cause-and-effect relationship, indeed exists between certain economical indicators and patent statistics. Any reader who wishes to share his/her view on the relationship between GDP, economic growth and patent filings, including their geographical distribution in his/her country, is welcome to leave a comment, or to contact me, as I'm currently working on a more in-depth analysis of these issues (and I would be happy to get in touch with other researchers interested in joining forces to study correlations between real-world economies and patent filings).
Pubblicato da Stefano Barazza a 1:05 am

Nice post. Your hypothesis is intriguing, though complex to prove. OHIM is having fun with statistics too - http://oami.europa.eu/ows/rw/resource/documents/observatory/IPR/joint_report_epo_ohim.pdf (see pg. 61).