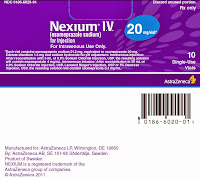 Yesterday, the US Court of Appeals for the Federal Circuit published its decision in the case of AstraZeneca v Hanmi, affirming the judgment rendered at first instance by the District Court for the District of New Jersey.

AstraZeneca holds the US Patents No. 5,714,504 and 5,877,192, which cover pharmaceutical compositions containing alkaline salts of esomeprazole, the S-enantiomer of omeprazole. In particular, AstraZeneca developed and marketed the brand drug Nexium, which contains the magnesium salt of esomeprazole as its active ingredient, for the treatment of gastroesophageal reflux disease and gastric acid related diseases. In 2010, Hanmi filed a New Drug Application with the US Food and Drug Administration for a product containing the strontium salt of esomeprazole, certifying, under 21 USC § 355(b)(2)(A)(4), that AstraZeneca's patents were invalid or would not have been infringed by Hanmi's product. The patent holder thus filed the present lawsuit, alleging patent infringement.

The Federal Circuit examined only one issue, namely whether the written description of the '504 patent limited the claim term 'alkaline salt' to a subset of specifically named salts, defined by six identified cations (Na+, Mg2+, Li+, K+, Ca2+, and N+(R)4). After reviewing the history of AstraZeneca's patents, the court focused on Independent claim 1, which reads as follows:


A pharmaceutical formulation for oral administration comprising a pure solid state alkaline salt of the (-)-enantiomer of [omeprazole] and a pharmaceutically acceptable carrier.

The judges observed that, 'on its face and outside the context of the '504 patent', the term 'alkaline salt' used in Independent claim 1 would not be limited to the cations named above. However, they found that the written description of the patent limited the claim scope to those cations, introducing a clear disclaimer of any other acceptable salt, as held in the appealed decision. The written description and the abstract respectively indicate that:

Reciting previous case law, the court noted that both the description and the abstract of the '504 patent 'clearly confine the invention to the six identified cations, disclaiming anything else' (see Honeywell v ITT and TG; see also Verizon Services v Vonage Holdings, for a case in which the court looked at the specification to find an implicit distinction between the invention and the prior art, and SciMed Life Systems v Advanced Cardiovascular Systems, where the specification limited the invention to a subset of the matter described by the plain language of the claim - both cases are reminiscent of Watts v XL Systems: '[o]ne purpose for examining the specification is to determine if the patentee has limited the scope of the claim'). This conclusion, according to the decision, is reinforced by the fact that the patent applicant conspicuously and consistently referred to only certain members of the class of substances which were potentially suitable for forming a salt with esomeprazole, and specifically to the six cations named above. The reiterated use of this subset of cations, coupled with the language of the description and abstract, 'conveyed a clear and definitive meaning that [AstraZeneca] was disclaiming other members of the class - like Hanmi's chosen strontium'.

The court dismissed three additional arguments raised by the patent holder. The first concerned the 'exemplified' language used in one sentence of the written description ('Alkaline salts of the single enantiomers of the invention are, as mentioned above, beside the sodium salts [...] and the magnesium salts [...], exemplified by their salts with Li+, K+, Ca2+, or N+(R)4 [...]'): the court found that the passage does not clearly affirm the intent to treat all the six cations as mere examples, and cannot be read as a denial of the clear disclaimer language mentioned above. The second argument focused on the prosecution history, but the judges could not identify any statement or data pointing to other salts beyond those identified in the written description. Finally, AstraZeneca sought to rely on claim differentiation, alleging that each independent claim reciting an alkaline salt has a dependent claim that differs only by the addition of 'wherein the alkaline salt is a Na+, Mg2+, Li+, K+, Ca2+, or N+(R)4 salt'. The court swiftly dismissed this final argument, noting that 'the doctrine of claim differentiation does not [...] override clear statements of scope in the specification' (reciting The Toro v White Consolidated Industries - see also Retractable Technologies v. Becton, Dickinson & Co.).

Confirming the district court's construction of the term 'alkaline salt' in the '504 patent, the Federal Circuit affirmed the judgment of non-infringement rendered at first instance. In spite of the outcome of the case, AstraZeneca acknowledged that the launch of Hanmi's esomeprazole strontium product is unlikely to significantly affect sales of Nexium, as the former 'is not AB-rated [a designation which certifies that a generic drug meets the necessary bioequivalence requirements and is considered to be therapeutically equivalent] and is not automatically substitutable for Nexium'.
Pubblicato da Stefano Barazza a 2:44 pm

I was always under the impression that the description of a US patent was not relevant to interpretation of the scope of the claims because (unlike the UK and Europe) it is never brought into accordance with the claim scope which has been allowed at the end of examination.