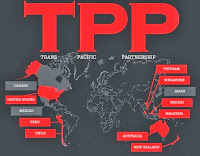 The draft IP chapter of the Trans-Pacific Partnership Agreement (TPP) was promptly analyzed in a series of posts published on the IPKat (general provisions, copyright, trademarks, and, of course, patents). Among the provisions dealing with patent rights, the most significant issues concerned the standards of protection for pharmaceutical innovation, including the following points:

In a statement issued last Friday, the United States Trade Representative clarified its approach towards the protection of pharmaceutical innovation, suggesting that the US may be willing to seek a more balanced compromise on the most controversial issues, taking into account the different social and economic needs of the TPP members. The USTR explained that the US is actively engaged in identifying the right balance 'to make life-saving medicine more widely available while creating incentives for the development of new treatments and cures'. In this perspective, the statement noted that the negotiators are still discussing about the best ways to achieve that balance. However, the latest round of meetings, held in Salt Lake City in mid November, appears to have had a significant impact on the general approach of the US on the matter:


The United States is a leading voice both for strong IPR protections and for access to medicines for the world’s poor, including in developing country TPP partners. We believe the best approach to pharmaceutical IPR issues in the TPP would be one that offers countries flexibility based on their individual circumstances. That’s why we’ve begun to work with TPP partners to gauge their interest in a “differential approach,” and to identify ways to tailor potential flexibilities based on countries’ existing laws and international obligations.

This flexible approach is based on precedent: Previous U.S. trade agreements covered by the May 10, 2007 bipartisan agreement. Under May 10, developing free trade agreement partners (like Peru) were offered greater flexibility relative to more developed trade agreement partners (like Korea). In TPP, we are seeking to pursue a similar idea, using previous agreements – like those with Peru, Australia, Chile, Korea, and Singapore – as benchmarks, but keeping an open mind as to how these standards can be tailored to reflect the situations of individual partners.

The idea of a 'differential approach', tailoring patent protection to the peculiarities of each country, is remarkably similar to the approach endorsed by most of the negotiating parties in the provisions of Articles QQ.A.2, and QQ.A.2 bis and QQ.A.6, previously rejected by the US. The USTR's statement appears to signal a subtle, yet remarkably important, shift in attitude (from an 'aggressive' - as defined by the previous USTR - to a 'differential' approach), which, as I suggested on the IPKat, could be the key to the success of the TPP negotiations on the matter.

On biologic medicines, the statement clarified that they represent a critical area of innovation, whose growth is of great importance for the development of new and more effective drugs. 'Biologic drugs', according to the USTR, 'need data protection because those drugs require enormous amounts of time and money to develop'. Although the statement reaffirmed the US proposal of a 12 year period of data exclusivity, it hinted at the possibility of negotiating a shorter term of protection.

The USTR also caught the occasion to acknowledge a shift in its attitude towards pre-grant opposition procedures, which had attracted significant debate during TPP negotiations:


Reflecting input from stakeholders, the U.S. now supports a more flexible approach under which partners could retain reasonable patent pre-grant opposition procedures. These procedures, available in some countries, allow third parties to formally object to a patent at the initial application phase. Based on stakeholder input and ongoing discussions with TPP countries, we believe that other elements in TPP will meet the larger goals of ensuring that patents are of high quality and provide appropriate incentives for innovation, while ensuring access to medicines.

We need a global body that can determine whether a given trade agreement is fair. What is clear from the TPP negotiations is that the US is negotiating hard for new forms of protection to be introduced which defend its interests. We need to have International norms for trade agreements to undergo appropriate scrutiny to make sure that no one country is able to unduly use its influence to force an agreement which harms the national interests of any member of the agreement.