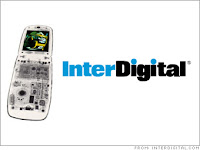 Wireless technology development company InterDigital has just submitted an 8-K filing to the US Securities and Exchange Commission, notifying the SEC of its motion to terminate its patent dispute with Samsung. This notification coincides with the payment by Samsung of the first installment of the US$400 million which Samsung has agreed to pay InterDigital in order to resolve the outstanding disputes involving Samsung’s sale of 2G and 3G products. The full text of the statement reads as follows:

"Pursuant to the terms of the patent license agreement (the "agreement") entered into on January 14, 2009 and effective as of November 24, 2008, by and between InterDigital, Inc.’s wholly-owned subsidiary InterDigital Communications, LLC and patent licensing subsidiaries (collectively, "InterDigital") and Samsung Electronics Co., Ltd. ("Samsung"), and in connection with InterDigital’s receipt of Samsung’s first payment under the agreement, the parties are jointly filing (i) a motion with the United States International Trade Commission ("USITC") to terminate the USITC action on the basis of settlement, (ii) a request with the arbitral tribunal operating under the auspices of the International Court of Arbitration of the International Chamber of Commerce to dismiss and administratively close the Samsung 3rd Arbitration, (iii) a stipulation with the United States Court of Appeals for the Second Circuit dismissing the appeal pending between the parties, and (iv) stipulations with the United States District Court for the District of Delaware to dismiss the parties’ proceedings therein".

InterDigital is not yet in a position to m,ake any significant comment on this deal beyond the text of the 8-K.  Source: Diana Swanson (Financial Dynamics).
Pubblicato da Jeremy a 10:07 pm