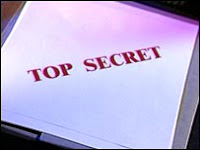 Writing earlier today on his IP::JUR weblog ("EU Community Patent and UPLS: Will There Be A Political Breakthrough Soon?") Axel H. Horns provides an update on his post of 2 November ("EU Community Patent: The Mill Goes On and On"), citing the blog of the Intellectual Property Experts' Group to the effect that

"On December 3 and 4 ... the Competitiveness Council will assemble again to see if they can reach an agreement on 'a general political' approach for the Community patent/UPLS efforts. The question on what language(s) should be the common one(s) for a potential community patent remains a sore spot for many member states. [...]"

But as Axel observes, there has been considerable recent activity in the EU Council which, it appears, has been carefully locked away from the general public:

As Axel notes, the decision to build UPLS on the basis of an Agreement outside the EU Lisbon Treaty not only enables accession by non EU-States like Turkey but also means that the painstaking process of ensuring ratification by all EU member States plus interested States outside the EU has to start again. The Danish Government has already indicated (Document 14531/09) that this would require a transference of competence and therefore either a national referendum or a 5/6 majority in Parliament. The still-unpublished legal questions referred to the European Court of Justice (ECJ) are also still pending.

PatLit notes that negotiations relating to the Anti Counterfeiting Trade Agreement (ACTA) have been conducted in conditions of almost total secrecy, which has caused a good deal of resentment. While not quite the same degree of black-out has accompanied the current burst of initiatives relating to the Community patent and UPLS proposals, there seems to be little willingness to open the substance of these proposals to the well-educated, skilled and highly-trained practitioners who will be responsible for making them work (or for demonstrating that they can't).

In a representative democracy such as that which the European Union purports to be, lip-service is often given to the importance of there being a well-informed electorate, whose mature and considered wishes might be translated into legislative policy. However, a cynic might suggest that intellectual property policy is far too important a matter to be left to wider debate and that it is for interested parties to scavenge the contents of leaks, Tweets, blogs and the rumour-mills in search of a better understanding of current developments.
Pubblicato da Jeremy a 3:16 pm