How easily can multi-issue disputes be slimmed down?

Fresh out today, and far too long to read in an instant, is the decision of Mr Justice Floyd (Patents Court, England and Wales) in Grimme Landmaschinenfabrik GmbH & co. KG v Derek Scott (trading as Scotts Potato Machinery) [2009] EWHC 2691 (Pat). It's an action for patent and design infringement in respect of a machine for separating potatoes from weeds, earth, clods, stones and haulm, met by a defence of non-infringement and a counterclaim for invalidity of Grimme's rights and ungrounded threats to sue for patent and design infringement.

Both sides seems to be the winners/losers in that, while Claim 1 of the Patent is invalid for obviousness, Claims 17 and 24 are valid; Claim 17 is infringed in some circumstances (both directly and indirectly) but Claim 24 is not; the design rights were not commonplace and were infringed in respect of the defendant's original product but not a subsequent version; the counterclaim for unjustified threats of patent infringement proceedings failed, while that for design right infringement succeeded. 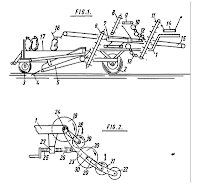 Apart from wondering what the costs order is going to look like, PatLit finds itself wondering how much time might have been saved by any of the various procedural reforms that have been discussed in the past year. While the court needed five hearing days, the variety of issues under consideration and the need to examine witnesses suggests that there wouldn't be much scope for savings here. As ever, readers' comments are welcome.
Pubblicato da Jeremy a 3:37 pm